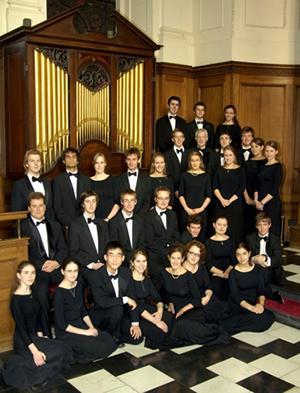 We are pleased to announce that the Clare College Choir will be coming to Mexico in 2019! Details to follow soon.
Since the founding of a mixed voice choir in 1972, the Choir of Clare College has gained an international reputation as one of the world’s leading university choirs. In addition to its primary function of leading services three times a week in the College chapel, the Choir keeps an active schedule recording, broadcasting, and performing.
Former directors have included John Rutter and Timothy Brown. Under the direction of Graham Ross, Director of Music since 2010, it has been praised for its consistently ‘thrilling’ and ‘outstanding’ performances worldwide.
In addition to live performances, the Choir has produced an impressive discography of more than forty recordings. Their recordings under Graham Ross on the Harmonia Mundi label have been released to great critical acclaim, earning praise for ‘exceptional singing’ and ‘immaculate performances’, a Le Choix de France Musique and a Diapason d’Oraward, and garnering a Gramophone Award nomination.
https://www.clarecollegechoir.com/ Source: Clare College Choir