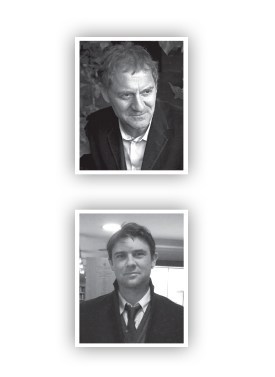 Sir Andrew Motion
Owen Sheers
Anglo Arts in collaboration with the British Council, CONACULTA and the Antiguo Colegio de San Ildefonso have the pleasure of inviting you to a Poetry Reading by Sir Andrew Motion and Owen Sheers.
Thursday 8 January, 20:00
Anfiteatro Simón Bolívar
Antiguo Colegio de San Ildefonso
RSVP: anglo.arts@tamf.org.mx
Free entry. Limited seating.
Andrew Motion was Poet Laureate from 1999 to 2009; he is Professor of Creative Writing at Royal Holloway College, University of London, and co-founder of the online Poetry Archive. He has received numerous awards for his poetry, and has published four celebrated biographies. His group study The Lamberts won the Somerset Maugham Award and his authorised life of Philip Larkin won the Whitbread Prize for Biography. Andrew Motion's novella The Invention of Dr Cake (2003) was described as "amazingly clever" by the Irish Times and praised for "brilliant and almost hallucinatory vividness" by the Sunday Telegraph. His memoir, In the Blood (2006), was described as "the most moving and exquisitely written account of childhood loss I have ever read" in the Independent on Sunday. His most recent collection of poems is The Customs House (2012). Andrew Motion was knighted for his services to poetry in 2009. In 2014 he received the Wilfred Owen Poetry Award.
Owen Sheers (b. 1974, Fiji) was awarded the Eric Gregory Award and the 1999 Vogue Young Writer's Award. In 2000 he published his first book of poetry, The Blue Book, which was nominated for the Welsh Book of the Year Awardand the Forward Prize Best 1st Collection 2001. However, it was for his first work of prose, The Dust Diaries (2004), that he won the Welsh Book of the Year Award 2005, and was nominated for the Royal Society of Literature Ondaatje Prize. In 2008 he published his first novel, Resistance, which has been translated into eight languages, including Spanish, and which received the Hospital Club Creative Award and was nominated for a Writers Guild Best Book Award. In 2010 he wrote and presented the television series A Poet's Guide to Britain for BBC4 as well as writing the presentation and the selection of poems for this anthology (Penguin 2009). His novel White Ravens (Seren, 2009) , was published as part of Seren's New Stories from the Mabinogion series, a contemporary response to the myth of Branwen Daughter of Llyr . He currently lives in London.
Past Highlights 2015